For all Branches, but simplified for Marines. 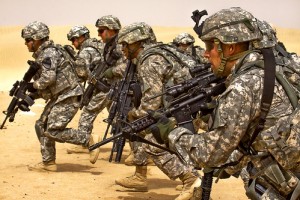 Before beginning, keep in mind that you are “NORMAL” for what you’ve been through…NORMAL! 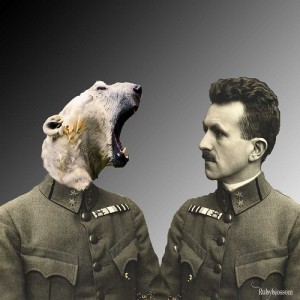 The Beast, or as the Shrinkers call it, your Primal Side (meaning the ass kickin, blood lusting side) is your first mission objective. And let’s talk about what that thing really is…you know, the Freddy Kruger side of your green ass that feels so good when you’re helpin people die for their country.

First off, your D.I. did a damn fine job of makin you a lean, mean killing machine. But no matter how you were lovingly nurtured in Boot Camp, you were never, ever truly ready for that first “Hit” of adrenaline. And Man! Your Beast loved it…still does.

This is something you’re gonna have gnawing at you for the rest of your days. And as one Super Squid (Seal) once said, “You don’t have to like it, you just gotta do it!” That means dealin with your Beast and with the strong desire for more adrenaline.

Your first and most important step in getting this under control is “Identifying your Feelings”. And I’m not talkin about some wishy-washy tree hugger feelings here. I’m talkin about full blown, Battle Tested Warrior Feelings!

If you’re ditty-boppin along and everyone you meet is qualifying for extinction (you want’a kill’em, cut’em or beat’em) then chances are those feelings are coming from your Beast/Demonic side. If on the other hand, people seem OK and you’re gonna allow them to live a bit longer, then most likely, it’s your Angelic side.

This is something you gotta work at and think about. You know, you don’t become an expert sniper by firing one round. It takes a lot of practice and discipline. By never losing control and being aware of your surroundings at all times you’re gonna stay on the mission of controlling the Beast and your desire for Combat Adrenaline. It ain’t easy.

Check out the My Friend the Beast page for a bit more on this, and write, email or call me if you need to figure this out. You know, in case you got a round jammed in your chamber?

#2– Second Topic to stir up brain cells over: 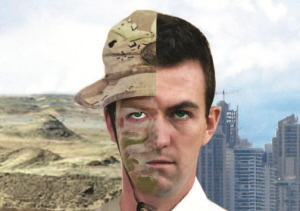 Besides standing watch on your Beasty, us Warriors also have to deal with the killing we’ve done. Here’s why.

When returning to the States we’ve gotta then learn to be tolerant of the civilian world. Because like it or not, you may be too far from the Base Exchange to buy food, beer and cigarettes. That means you gotta mingle (no Marines, not a mean dog).

In other words, you’ve gotta infiltrate to the supermarket or other such places and adapt to things that most likely will piss you off.

The Warrior World is real simple, real black and white. We live by Honor, discipline and self-sacrifice. Our way of overcoming opposition is simply more fire power. But that don’t work real well in the gray World of Civilians.

We’ve gotta learn to live in both worlds at the same time. And not body bag the clerk who forgot to put your “toilet tissue” in the cart; which you didn’t discover til makin a head call later that night. (Guess in that case you’d be…” shit out’a luck”?)

Well anyway, think about this one, cause when you get stuck between these two worlds, your world turns to shit. At that point you may get depressed or you may get your weapon… to work things out the Warrior way. Might be best to talk to someone in that event.

So once again, call, email or get the number off the Get Help Now page and talk to someone who truly cares! 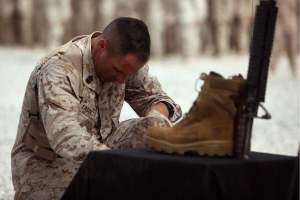 Controlling the Beast and Living in Two Worlds is bad enough, but on top of that us Warriors have also got a new and improved Standard of Friendship.

On the battle field we call this a Warrior Trust Bond. In other words, we die for each other without question and without hesitation. That doesn’t happen much in the civilian world, but we still set that standard for all future relationships. That means, everyone we meet, care about, love, marry, want’a hang out with, or just plain have as a neighbor.

Do you see how this can be a problem in having a long term relationship? This Trust Bond Attitude can also cause us a world of hurt in other ways. That is, creating a fear of showing weakness to our Military Family Members, being an “outcast” if in fact we do show weakness. (Thought that feeling bad about killing folks was being human?)

If you want to consider more about how this topic affects those you care about, see the Impact on the Family page.

# 4 – Yet Another Spine-Tingling Mystery for Civilians: 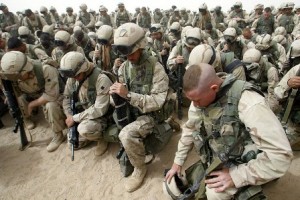 And then there is War Itself. To kill another Human Being Changes the Killer and we as Warriors change dramatically inside.

When we lose our Brothers (and now Sisters) we change dramatically inside. We are witness to and/or take part in the atrocities of the battle field.

We feel the loss, the guilt over what we could have done and didn’t do. We feel survivor guilt that we are alive and our Brothers are not, and we long for death that we may be by their side once again.

We feel the pain of loss and of abandonment by the country we thought we were fighting for, and when we return, we are often treated like outcasts.

We often loathe politics and politicians and for the most part civilians that do not or don’t want to make the attempt to understand. 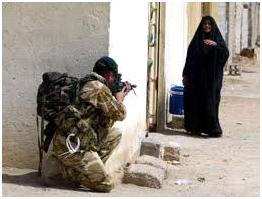 So now do you see why it’s so damn confusing? A warrior fights many fronts. There’s the Angelic against the Demonic battling for control. There’s the Battle between Two Worlds; one we love and one we hate. There’s the longing to be with our Sacred Military Family, instinctively our clan, our Tribe and we live in terror of being cast out of it. And then there is the impact of the atrocities of war itself.

So cut yourself some slack! And talk about what’s turnin your brain into green chipped beef over two buns.

Gonna summarize (Marines, Not to make it hot) for anyone havin trouble seeing the big picture.

And through all this, Warriors ask only to be loved, to be given the acknowledgment and confirmation that they were justified on the battle field, that their bothers died for a noble cause, and they long to feel welcomed in the society they fought to defend. This however, does not often happen. All too often, Warriors can only depend upon fellow Warriors. Most are lost when returning from war, and far too many forgotten.

This is unacceptable! Not this time! No one gets left behind on this Mission…No One!

Remember your strength as a Warrior and Adapt your Military Skill Set to civilian society!

Surrender is not in our Creed!